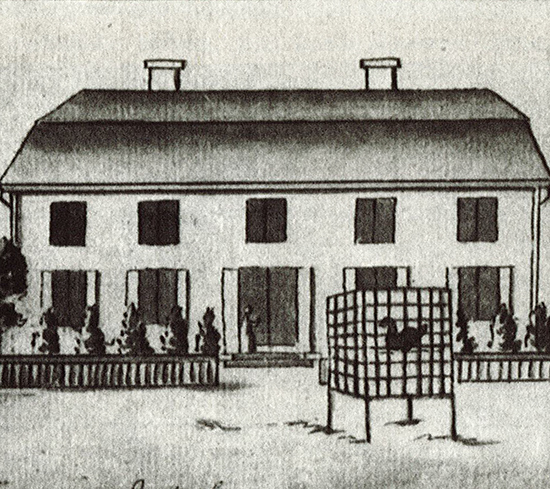 The small estate Hammarby, 15 km SE of Uppsala, was bought by Carl Linnaeus in 1758. He wanted a farm on the countryside where he could spend the summers together with his family, away from the unhealthy environment of Uppsala.

Today, few Swedish manors present such an authentic milieu. It reflects the private life of Linnaeus as well as his scientific work.

In 1758 Linnaeus bought two small estates: Sävja and Hammarby. During their first summers at Hammarby the Linnaeuses lived in the detached west wing. The main building at Hammarby was built in 1762. Linnaeus also had a small, and reasonably fireproof, museum built at Hammarby where he kept his extensive natural history collections.

Linnaeus received many visitors at Hammarby. Inside or outside the museum, he lectured from a peculiar lecture stool, "plugghästen" (Sw. plugga - to study, häst - horse).

After Linnaeus´ death in 1778 his wife Sara Lisa remained at Hammarby for many years together with two of their daughters. The Swedish State bought the houses and the park from his descendants in 1879 and it is now managed by Uppsala University.

Work in our gardens
The Botanical Garden, the Linnaeus Garden and Linnaeus' Hammarby.
Support our work
Become a member supporting The Linnaean Gardens of Uppsala or adopt a tree in The Botanical Garden.
Last modified: 2021-12-07
Print