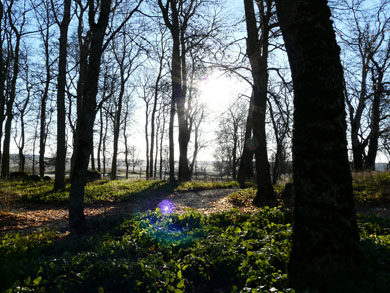 Behind the main house is a wooded park, with paths winding beneath the trees, among boulders and carpets of martagon lily and dog’s mercury (Mercurialis perennis L.).

On maps from the 17th and 18th centuries, this area is marked as a garden. Originally it was only used as an orchard, but when Linnaeus moved to Hammarby he also had Swedish and foreign species of interest for his research and teaching planted here.

After Linnaeus’ death, the garden became overgrown and assumed a woodland character, with deciduous trees such as elm, maple and ash. In summer, the sunlight has to filter down through the dense foliage, and only shade-loving plants can survive in the gloom. Among them are several species planted by Linnaeus: martagon lily Lilium martagon, sweet cicely Myrrhis odorata, giant bellflower Campanula latifolia and barrenwort Epimedium alpinum.