The family tree of flowering plants

The diversity of living things can be represented as a family tree. In the Botanical Garden we have created a planting to show this. Modern classification and naming of plants is based on our knowledge of their relationships. Come and discover the exciting diversity of plants!

Most botanic gardens have systematic beds, where the plants are organised according to how they are related. Increased knowledge about the evolutionary history of the flowering plants has necessitated changes in the plantings. In the middle of the 1990s the Botanical Garden’s systematic beds underwent a complete restructuring. However, during the years that followed it became clear that new discoveries in plant systematics, based on comparisons of their DNA, would necessitate another complete revision. In the autumn and winter of 2011/2012 the current family tree of flowering plants was laid out. 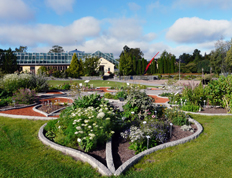 The new systematic plantings are in the form of a stylized tree, with the flower beds forming the leaves and the paths, the trunk and branches. The plants growing in each ”leaf” are more closely related to each other than to the plants in other ”leaves”. The branching pattern of the ”tree” shows how the different plant groups (”leaves”) are related to each other. The flowering plant lineage has branched again and again over time, giving rise to nearly 400 000 species living today. Of course we cannot show all that diversity, so we have selected almost 300 plants to represent the most important groups. All of these plant lineages can ultimately be traced back to the common ancestor of flowering plants, 150 million years ago. 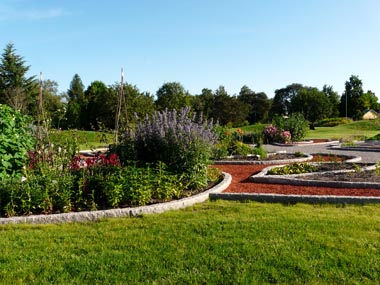 Moving up the tree along the trunk we soon encounter a mosaic representing a pollen grain with three pores, the type of pollen found in around two-thirds of all flowering plants. These plants belong to a group called the eudicotyledons, which all share a common ancestor. Beside the branch to the right that leads to the Caryophyllales is a mosaic depicting the chemical formula of the pigment molecule betalain, which arose in the common ancestor of these plants. The betalains are red-coloured pigments, such as that found in beetroot. The branch to the left leads to the large plant group known as asterids, which comprises a third of all flowering plants and half of all eudicots. Asterids are characterised by flowers with fused petals, forming a tube or trumpet.

Similarity suggests relatedness – but not always

The classification is not based on isolated key characters but rather on a hypothesis of evolutionary relationships (substantially based on DNA comparisons). Closely related plants often resemble each other, but plant groups that have secondarily lost a characteristic can still belong within a larger group where that characteristic is typically present. For example, the selleri group (Apiaceae) has free petals even though it belongs within the asterids which typically have fused petals, and the carnation group (Carophyllaceae) lack betalain pigments even though they belong within the Caryophyllales which usually have them. 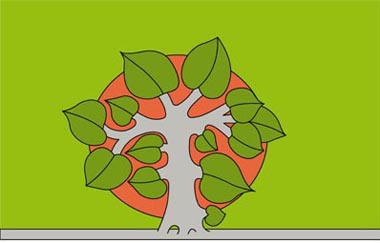 Mats Lindegren designed the family tree bed. The shape of the tree and leaves is modelled on a lime (linden) tree, honouring Carl Linnaeus whose surname (devised by Carl’s father) derives from ”lind”, Swedish for lime tree. In the 18th century, Linnaeus was the first botanist to propose a natural classification for the plant kingdom: ORDINES NATURALIS.

The four mosaics illustrating different characteristics that have arisen during the evolution of plants were created by the artist Liv Saetre Valeri.