The giant waterlilies (the genus Victoria)

The discovery of the giant waterlily in the beginning of the 1800s caused a sensation. It received the genus name Victoria in honour of the then queen of Great Britain and Ireland. Initially there was only one known species, Victoria amazonica from the Amazon River. A second species with a higher leaf edge, Victoria cruziana, was subsequently discovered in the Parana River of northern Argentina and Paraguay. Of the two species, Victoria cruziana does better under greenhouse conditions and is the one grown at Uppsala Botanical Garden. 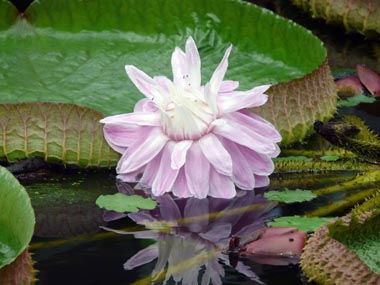 The giant waterlily does not normally flower during the daytime when the Tropical Greenhouse is open to visitors. Therefore, special open evenings are arranged on a few dates each summer. Find out more in our calendar.

From seed to seed

During the 1800s the giant waterlily became the height of fashion in the gardening world. Expeditions sent to the Amazon River to bring home giant waterlilies for the greenhouses of Europe encountered difficulties: the plants rotted and seeds did not grow. Not until 1849 was the giant waterlily succesfully cultivated, after it was discovered that the seeds must be stored in water – they die if allowed to dry out.

In the Botanical Garden giant waterlily seeds are sown in March and a seedling is planted out in the greenhouse’s Victoria Pond in April, when the leaves are about 15cm in diameter.

The planting pot in the centre of the pond holds almost a cubic metre of earth. This earth is extremely rich in nutrients and the plant grows very quickly. By the middle of June the pond can already be filled by 8-10 leaves. Each leaf can be up to 2 metres in diameter and is highly buoyant. The underside of each leaf is covered in sharp spines, a protection against herbivores.

In its native land the giant waterlily flowers open up as darkness falls. During the light Swedish summer nights the timing of flower bud opening varies. Normally, each flower is open for two consecutive nights and is white on the first evening, and purplish red on the second. When the flower opens it rises above the surface of the water, only to sink back down when it closes during the day.

A fully opened flower can be 40cm in diameter. It is full of several whorls of petals and spirally arranged stamens. The temperature inside the flower is about 6°C above the surroundings and it gives off a sweet pineapple-like scent. In cultivation the plant can have up to 50 flowers each summer.

In its natural habitat the giant waterlily is cross-pollinated by beetles but in the greenhouse self pollination of the flower results in a capsule containing large numbers of 3-5mm long, edible seeds. The plant is a short-lived perennial and can be overwintered but at the Botanical Garden it is raised as an annual, grown from seed each year. In November the giant waterlily season is over, the pond is cleaned and the seed for next year is cared for until it is time to sow again.