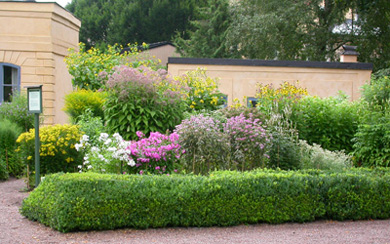 “The Autumn Parterre shows a similar stock of plants [as the Spring Parterre],
which in winter are covered with cut spruce branches. We owe a considerable
number of these to Virginian soils.”
Carl Linnaeus, Hortus Upsaliensis 1745

Many species from "Virginia", i.e. eastern North America, are grown in the Autumn Parterre. One of them is coneflower Rudbeckia laciniata, named by Linnaeus after the founder of the Botanical Garden, Olof Rudbeck, and his son, Olof Rudbeck the Younger.

The last plant to blossom in the parterre is the autumn crocus Colchium autumnale, which according to Linnaeus will serve to remind the gardener to take the “Indian” plants indoors, as early autumn night frosts often occur between the 17th and 29th of August.